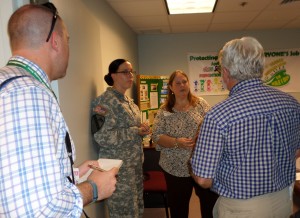 Helen’s Haven CAC has been given an office in which to conduct forensic interviews on site for military children.  Law enforcement officials will observe through closed circuit television in an adjoining room. Helen’s Haven CAC and Fort Stewart agencies have worked together frequently since the opening of the CAC in 2005. This center on post further cements Fort Stewart leadership’s commitment to working with Helen’s Haven for the safety and welfare of military children. Since all of these agencies are in one location, the client does not have to retell their experience multiple times, thereby, reducing trauma. 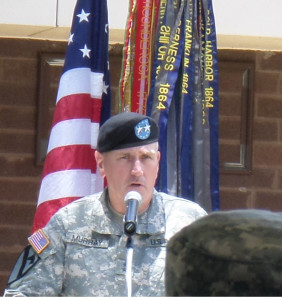 Major General Mike Murray addressing those in attendance at the Ribbon Cutting Ceremony of the Marne Advocacy Resource Center at Ft. Stewart, GA.

Major General Mike Murray, the Senior Commander of the 3rd Infantry Division, stated that this center is modeled after centers on other United States military installations. The general said, “My ultimate goal for this center is to have no need for it. I would love to come down here and close this facility down, but until we fix this problem – and it takes each and every one of us to fix this problem – there’s a need for this center, and I’m absolutely convinced that this center will do wonderful things.”