Kris, as drawn by Sarah(age 4)

CACGA:  What is Coastal CAC?

Kris Rice:  CCAC provides a confidential, child-friendly site for video-recording forensic interviews with children who have alleged sexual or severe physical abuse or who have witnessed violence.  By recording interviews, we prevent kids from having to talk about their abuse repeatedly, thus decreasing the trauma of disclosure, and preserve children’s initial statements for court purposes.  The center serves as a liaison with other involved agencies and offers play and trauma-focused therapies, crisis intervention, case management, emotional support, and follow-up services for child victims and witnesses and their non-offending family members at no charge.  CCAC also provides community education and professional training on child abuse and related topics.

CACGA:  What would you like the community to know about the professionals who work there?

Kris Rice:  Our staff is made up of genuinely talented and dedicated professionals.

Melissa Dotterweich, clinical coordinator, is an extraordinarily gifted and creative clinician who began as a graduate intern and has now been with the center for 11 years.  In that time, she has made an enormous difference in the lives of hundreds of young victims and their families, has taught and mentored numerous interns, and has truly earned the respect of her colleagues on the MDT.

Meaghan Ready, therapist, is new to our center this year, having come to us from the CAC in Augusta.  She brings energy, enthusiasm and an eagerness to learn to her new role here, and we’re looking forward to great things from her.

Victoria Burch began as an accounting intern at the center almost six years ago, was hired as administrative assistant following graduation, and subsequently promoted to office manager.  In that role, she continues to amaze us with her self-taught skills in a variety of media and technologies, in addition to her terrific talents for financial and organizational management.

I have been with the center as director since it opened in 1992, and am contemplating retirement in the next year or two—so anyone with an interest in relocating to Savannah and experience in providing high-quality services to victims of child abuse should send us a resume (ccac@ccac-savannah.org).

CACGA:  What would the Chatham County/Eastern Judicial Circuit be without the center? 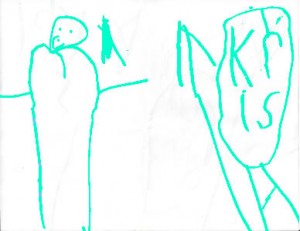 Kris Rice:  Former DA Spencer Lawton and former child abuse prosecutor (now chief assistant DA) Greg McConnell were instrumental in getting the center started 23 years ago.   Current DA and long-time CCAC board member Meg Heap has continued that strong support of the center and its mission.  Important partnerships have also been forged with local law enforcement, DFCS, Juvenile Court, the schools, the medical community, and other victim service providers.  To date, the center has provided critically-needed forensic and therapeutic services to more than 5,000 children–so our judicial circuit without a CAC is now unimaginable.

CACGA:  How can people in your community become involved?

Kris Rice:  There are lots of ways to make a difference for child abuse victims in our area.  At the top of that list is the desperate need for more Chatham County foster homes for kids who have been removed from their families because of abuse or neglect.  Due to the lack of adequate foster care, Chatham kids are placed as far away as Macon, Brunswick, Augusta or even Atlanta.  Call 912-651-KIDS to learn more about how you can help.

Educate yourself by inviting a speaker from CCAC to your congregation, class, or civic group to learn more about the dynamics, extent and effects of child sexual abuse, and about how to help protect children.

When called for jury duty in a child molestation trial, be willing to serve, listen carefully to the evidence, and help serve justice in the courtroom.

Volunteer your time with the center, at one of the local children’s shelters, with CASA, or as a mentor—through Big Brothers/Big Sisters, the Boys and Girls Club, or LOVE Mentors.

Hold a fundraiser for the center, or support one already in place (such as The Market at 3 West Ridge, which will benefit CCAC, in February, 2015).

Advocate for meaningful legislative change.  For instance, GA lacks felony child endangerment laws, which would hold parents responsible when they fail to protect their kids or act in recklessly negligent ways (e.g. locking a child in a hot car or using a convicted sex offender as a babysitter).  Our state legislature can remedy that by enacting stiff statutes similar to those most other states already have.

On the federal level, child molestation is not considered a UCR (Uniform Crime Reports) Part I crime, and therefore is not reported by local law enforcement to the FBI.  Consequently, we have no clear data on the number of molestation cases reported to local police departments throughout the country.  Unlike homicide, rape, arson and even car theft, child molestation is not considered a serious Part I crime for federal statistical purposes. Only Congress can change that, so let your senators and representatives know that they should.

Kris Rice:  Like many in this field, I didn’t choose the work; it chose me.  Professionals who work with child abuse victims for any length of time– whether as investigators, prosecutors, advocates or therapists—often consider it a calling.  We don’t have a choice; it’s what we DO.  It’s part of who we are.

And although there are days we feel there isn’t enough hot water and soap to scrub off all the ugliness we’ve heard, we know we’re doing the work we’re meant to do.  Because when young victims come into the center—nervous, anxious and scared, afraid to share their bad secrets—but leave smiling, relieved that they were believed and not blamed, proud of themselves for having been brave enough to tell—they know they’re in the right place.  Just as we know that we are.