Dan Hillman is the Executive Director of Child Enrichment, Inc., the Child Advocacy Center, CASA – Court Appointed Special Advocates and the Clothing Closet for foster youth.  Child Enrichment is a full member center of CACGA, and also is fully accredited by the National Children’s Alliance.

CACGA:  What is Child Enrichment and its mission?

Dan Hillman: Child Enrichment is a 501©3 non-profit charity which began in 1977, and began serving children in an emergency shelter in 1978.  Child Enrichment’s mission is provide and coordinate comprehensive intervention, stabilization, advocacy and prevention services in the best interests of abandoned, abused, neglected and sexually abused children.  The Child Advocacy Center began in 1986, CASA was added in 1995 and the Clothing Closet began in 2008.  The emergency shelter closed on February 7, 2007, when the last children, a sibling group of four were placed with an adoptive family.

Child Enrichment is a guiding light for other agencies, organizations or individuals who are concerned about the health and safety of children.  We work hard to actually place children as the number one priority, and we expect other youth serving organizations to do so as well.  We will help you, respect you, yet, confront you if your words, behavior, or efforts are not in the best interest of our mutual clients.  We will encourage you, and you will become our ally, and we yours.  Child Enrichment is a philosophy, as well as a wonderful organization.

CACGA:  What would you like your community to know about the professionals who work at the Child Enrichment?

Dan Hillman:  Heroes and angels… and, I attempt to be the angel herder.    Ginette Williams is our CAC director, Kari Viola, Forensic Interviewer; Denise Field, Therapist; Cheryl Boucher, Therapist; collectively these four women ARE the Child Advocacy Center of Child Enrichment;   To me, faith is a personal matter, yet, when I speak of the child advocacy and other professionals who are employees, I say: THEY HAVE BEEN PLACED HERE TO DO THIS WORK.  Almost everyone reading this knows that child advocacy work is difficult and stressful.  We also know that few things are more important than protecting children.  The twelve full and three part time employees of Child Enrichment are heroes, as were their predecessors.   I work very hard to inform the community about CEI and our mission, as well as the specific work being done to help child victims to recover.  Our MDT allies provide our most significant support, and it is mutual among all members.  Yet, if we surveyed the adult population of the Augusta Judicial Circuit, which is Burke, Columbia and Richmond Counties, I don’t believe that 20 % know what we do, or even why we do it.  So, there is much yet to be done.  Raising awareness of child safety and child advocacy issues should be easier than it is.  I was working with a woman who was assisting me in organizing a strategic planning retreat for the board of directors; she asked me what Child Enrichment does.  After I spoke for about ten minutes, she said: “you’re snatching babies out of the fire!”  Maybe that is what we are doing.  We prefer to say that we are working to save the emotional and physical lives of abused children every day.  Those are the things I would like the community to know about the work of the angels and heroes of Child Enrichment.

CACGA:  What would the Augusta Judicial Circuit be without Child Enrichment?

Dan Hillman:  Hypothetical questions drive me crazy.  Worst case scenario: There is no CEI, no CASA program, no Child Advocacy Center, no clothing closet for needy children.  More specifically, there would be no forensic interviews, and thus, no evidence for the DA to prosecute alleged perpetrators of crimes against children.  There most certainly would not be free high quality trauma focused cognitive behavioral therapy for child abuse victims, their siblings and their non-offending caregivers.  There would not be crisis intervention and referral services or family and victim advocate services.  There would not be free training for mandated reporters, or training for new DFCS employees on awareness, assessment and documentation of suspected abuse and neglect.  There would not be 60 CASA Volunteers who drove over 47,000 unreimbursed miles last year to represent child clients of Child Enrichment. There would not be Art of Chocolate or Cookin’ for Kids special events.  So, the answer to:  “What would the Augusta Judicial Circuit be without Child Enrichment ?” It would be an even scarier place for children.

CACGA:  How can people in your community become involved with the Child Enrichment?

Dan Hillman:  Seven ways…1. Donate; 2. Sponsor an event: Art of Chocolate or Cookin’ for Kids; 3. Attend one of presentations of Darkness to Light: Stewards of Children the child abuse prevention programs; 4. Volunteer; 5. Tell someone else about Child Enrichment, “LIKE” us on Facebook, share our posts from Child Enrichment, Inc., or Cookin’ for Kids.  6. Go to our webpage:  www.ChildEnrichment.org   and learn more; 7. Organize and hold a fundraising event for Child Enrichment, the Child Advocacy Center and CASA, the Court Appointed Special Advocates for abused children. 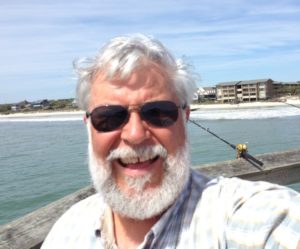 Dan Hillman:   In my senior year of undergraduate education (1974, yes, I am old enough to be grandfather to most of you), I was interning in a youth recreation program.  A six year old boy who was a regular participant came to the gymnasium and he needed help.  He had been beaten so severely by his father that he suffered internal injuries. He spent 37 days in the hospital, and was the first report of suspected child abuse that I made.  The idea of helping to save a child’s life, and the idea of preventing the abuse of other children became a passion of mine.    So, 40 years and six months later, those initial simple goals continue to be the most important that I have.  Children are not safe, and our society has not done a very good job of preventing the physical and sexual abuse of children.  I have now reported over 2,200 cases of suspected abuse, neglect, or sexual abuse of children. And, in my role with Child Enrichment I have overseen the services provided to over 9,826 abused, abandoned, neglected and sexually abused children, most of whom were from Burke, Columbia and Richmond Counties of Georgia.  My early illusions of celebrating the end of child abuse in the United States melted away.  It was not until after reading the treatise written by Victor Vieth… Unto the Third Generation, that I reframed my goals.  It was around 2004 and I was suffering from severe anger and frustration due my failure to gain traction and to get large segments of society to take up the cause that all of us in the CAC and CASA fields find so critically important.  Child Enrichment employees were also suffering from burnout and severe stress.  It became clear that my focus must change.  We are at the beginning of a movement to protect children.  We must build a foundation, and, work to add new child advocates, and protect current ones.  Knowledge and experience must be maintained and passed on to the next generations of advocates, interviewers and therapist.  Some of my goals have been realized.  Stress is still present, but we are managing it better, and the last six employees to leave Child Enrichment have moved onto other child advocacy positions. They did not leave the profession, as so many had previously.   The other most significant motivating factor was marrying Jan, one of the greatest child advocates on the planet.  We met in graduate school where we each earned Masters degrees in Social Work, and she is responsible for seven schools within the Richmond County Board of Education.  We have been married 31 years, and share the idealistic goal to make all children safer.   And, then there are: GACAC; NCA; NCAC… a true network of child advocates.  I need inspiration and motivation, and you all help to provide that.  Thank YOU for all that YOU do !  Take care of yourselves.